Rising Korean artists BTS (kor.방탄소년단,  rom. Bangtan Sonyeondan, eng. Bulletproof Boy Scouts) are on a mission to provide a voice for the youth against the societal bullets of prejudice, striving hard to protect their values and music. They have been rising in Billboard charts, performing in the Grammys, and constantly breaking iTunes chart records, recently surpassing Adele’s record. With their healing music that touches on a wide range of genres and have themes of political and social commentary, mental health, self-love and youth empowerment, they have achieved selling over 20 million physical albums worldwide within 7 years. Along with this success, the 7 members (RM, Jin, SUGA, J-Hope, Jimin, V, Jung Kook) give back by using their platform to promote their advocacies starting with their Love Myself #ENDViolence Campaign that they launched together with UNICEF and recently won as Best Integrated Campaigns and Events in the UNICEF Inspire Awards. A portion of their album and tour profits are used to aid protection of children and teens against violence. They promoted this campaign by giving a speech in the 73rd United Nations General Assembly. They are known for their silent donations to various causes such as Sewol Ferry Tragedy, Black Lives Matter, Live Crew’s Crew Nation, and many more. With their large following and dedicated ARMYs (fans’ name that means Adorable Representative MC for the Youth), various brands come rushing to get them as their endorsers and ambassadors such as Hyundai, Chilsung, Lemona, FILA, System Homme, Formula E, New Era and very recently, Samsung.

Last February 2020, it was announced that Samsung signed a partnership with BTS for the marketing of their products. Samsung provided the AR (Augmented Reality) technology display for the band’s global contemporary art exhibit “Connect, BTS” in various cities all over the world. Part of this partnership is the BTS x Samsung Galaxy S20 (Purple Edition), earbuds, and charging pad (for select countries only). I’ve been using iPhones for almost 10+ years and really debated long and hard with myself if I was really going to buy an android phone just because it came along with photocards of the band members. Of course, one of the downsides was that my whole digital ecosystem is enclosed in IOS, how the hell was I going to migrate everything to android OS? In the end, I still bought it after checking the specs of the phone.

The Galaxy S20+ BTS Edition phone cost Php 57,900 while the Galaxy Buds+ BTS cost Php 8,999. Though I availed of the pre-order discount last June where the BTS Galaxy S20+ and BTS Galaxy Buds package only cost Php 58,485 in total. SamsungPH opened online pre-orders last June 24 with some small mishaps on their online site which led me to losing a slot. Next thing I knew, everything was sold out. Tried again the next day, stocks were still labelled as sold out until I saw someone tweet that they were cancelling their order so I jumped right in and snatched the slot! The phone and earbuds arrived on my doorstep 2 weeks later, on July 11.

The phone came along with a clear case, BTS-themed stickers for decoration, good-quality photocards of each member, and the usual charger+wire, wired USB-C type earphones set, and ejection pin. The phone’s sleek dimensions are approximately 6.37 in × 2.90 in × 0.31 in. It has a glass back with the band’s signature purple iridescent color, the BTS logo engraved at the bottom, and tiny little purple heart below the camera lens. The phone has a DepthVision Camera in addition to the regular S20’s camera. It has a storage capacity of 128GB and a RAM of 8GB (this is what primarily made me decide to push-through with purchasing it).

This version of the Galaxy S20+ has pre-installed purple BTS themes. It also has special pre-installed apps such as the Weverse app (a social platform for the band to connect with their fans) and the BTS XR Snapshot, an AR app where users can take photos with AR images of the members (probably the purpose of the 8GB RAM). The Galaxy S20+ includes an AI-powered camera mode called “Single Take” that allows users to capture photos, videos and gifs simultaneously in one take. It can record 8K videos at 24fps with a bit rate of 80 Mbps (though still irks me that the IG in-app camera quality is not at par).

I know it’s probably nothing new to android users, but as an IOS user, my favorite feature is the split screen feature which allows the user to have 2 apps simultaneously showing on the screen (excited to use this feature on the next VLive for live twt translations). There are multiple options for security locks, in my case I chose to use facial recognition, fingerprint, and pin. Not sure if it’s the same for others but it took a good few days for my phone to unlock using facial recognition smoothly. It’s my first time using Android 10 with One UI. So far I really like how there are options for me to modify/customize gestures and controls so I wouldn’t have a hard and confusing time switching from IOS.

*Why is everything Purple?: BTS member V mentioned “I purple you” during 3rd Muster ARMY ZIP fan meeting back in 2016 when he saw ARMYs lit their lightsticks in purple. He then explained on the spot that since violet is the last color of the rainbow, it means they will love us until the end. Since then, the color purple has been very significant for the group and the fans. I love you (saranghae) = I purple you (borahae).

The Galaxy Buds+ BTS Edition had a bigger packaging than the usual ones since it came along with its own case. The purple case included the band’s logo, a purple heart, and their signature “I Purple You” line. It also included another set of photocards of the 7 members wearing the buds. The buds have a purple design with the logo and another purple heart printed on. It comes with its usual USB-C type charger wire and plug and extra bud covers.

Once you connect it to the phone’s Galaxy Wearable App, you can adjust its equalizer depending on what element of the audio you want boosted, as well as adjust the ambience feature. The ambience feature allows you to adjust the external sounds you want to hear so you won’t have to remove your buds when listening to someone. Overall the sound quality of the Galaxy Buds+ is nice and clear, better grip and noise-cancelling than my Airpods.

Thanks to BTS, I get to go out of my comfort zone in IOS and try out an Android phone this time. I really like the sleek design of the phone and as well as the ability to customize a lot of its functions. Although if you’re lazy to customize stuff, the UX might just frustrate you. Even if you’re not a fan, the 8GB RAM is the real kicker for me, everything gets to run smoothly.

Watch the band’s unboxing video of the phone and buds here:

Stream their latest release from their Japanese album MOTS: The Journey, “Your Eyes Tell”: 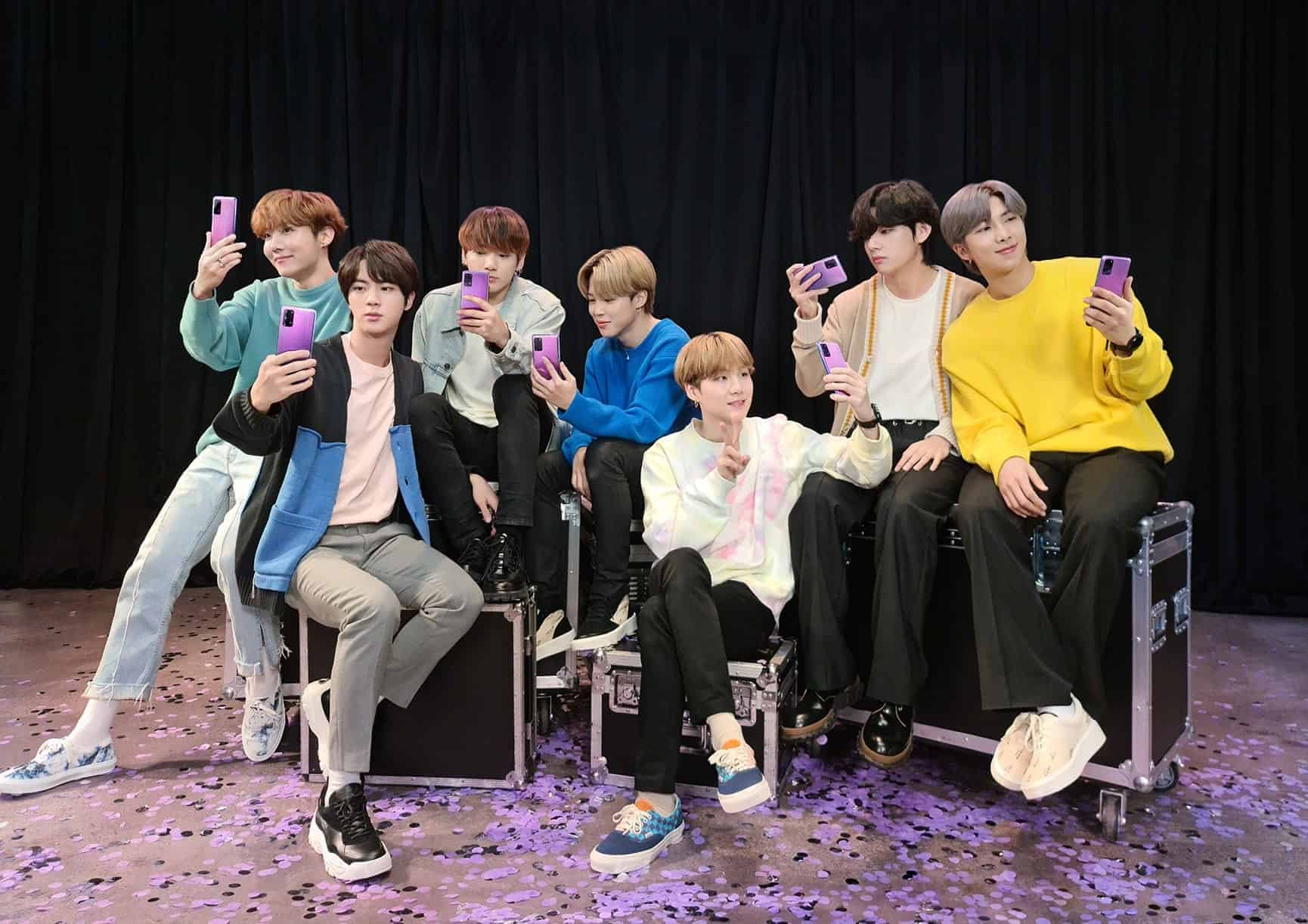 Grocery Delivery Apps in the Philippines That Will Deliver Food Right at Your Doorstep!

The Rise of TikTok

Winners of the 1st Gawang Agustin Art Competition: a celebration of poetry in art

Grocery Delivery Apps in the Philippines That Will Deliver Food Right at Your Doorstep!

You may have missed

Winners of the 1st Gawang Agustin Art Competition: a celebration of poetry in art